THE CAP – It is not easy to find a Vietnamese restaurant in South Africa. The Vietnamese community in this southernmost African country is small, and the number of restaurants offering authentic Vietnamese cuisine is less than in other countries I have been to.

So whenever you fancy a bowl of hot savory pho (beef noodle soup), I usually have to cook it myself or drive 50 kilometers from Pretoria, where I live, to nearby Johannesburg.

VIETNAMESE CLASSIC: A bowl of pho served with a large serving of soup accompanied by hoisin sauce, sriracha, a slice of lemon and a plate of bean sprouts and
basil. — Photos VNS Lại Hồng Minh

For some time, Vietnamese friends, including those who have lived in the country for a long time, have been whispering in my ear the authentic pho at the Saigon restaurant in the far south of the city of Cape Town. So one day I decided to travel 1,500 km for a bowl of this Vietnamese classic.

NOT TO BE MISSED: The restaurant is full of guests in the evening.

Cape Town is a must-see destination with the iconic Table Mountain and the famous Cape of Good Hope, and I finally had the chance to visit the city last month, and the first thing I did was take an Uber and rush to the Saigon restaurant.

Located on the corner of Kloof and Kamp streets, the restaurant was easy to find with its eye-catching yellow neon sign. NATIONAL PRIDE: Saigon Restaurant has captured the hearts of local and Vietnamese diners.

This is a modest but elegant restaurant over two floors with a contemporary setting and a wonderful view of Table Mountain.

The menu was a highlight of fantastic Asian cuisine with an abundant choice of starters and main courses with chicken, duck, beef, lamb, pork, seafood and even vegetarian options. As my aim was to try the ‘best pho in South Africa’, I quickly looked for him.

The name of the dish is printed in bold in the middle of the menu:Pho Bo – the famous Vietnamese traditional clear broth beef noodle soup.”

There are two sizes – large and medium, priced at ZAR 165 (nearly $11) and ZAR 95, respectively, quite reasonable prices for an Asian dish here.

COMPLIMENTS TO THE CHEF: Nguyễn Văn Mỹ prepares rare slices of beef for a bowl of phở. He always chooses the freshest ingredients.

I ordered and was quickly served with a sizable portion with hoisin sauce, sriracha, a slice of lemon and a plate of bean sprouts and basil. The accompaniments suggested that this dish was served in the southern style of Việt Nam.

The aroma was authentic and tasty. The dried rice noodle, which is popular overseas, was boiled well to look soft and fresh enough. The hearty slices of purple and green onions reminded me of Hà Nội’s Phở Thìn shop on Lò Đúc Street.

The broth wasn’t quite clear, but it tasted good of everything pho need broth, beef bone soup, roasted onions and ginger, plus the spice collection. The thin slices of rare beef were flavorful and juicy, while the well-done brisket was decently tender. Broth, noodles, meat and aromatic herbs merge in a perfectly harmonized taste. I felt delighted. 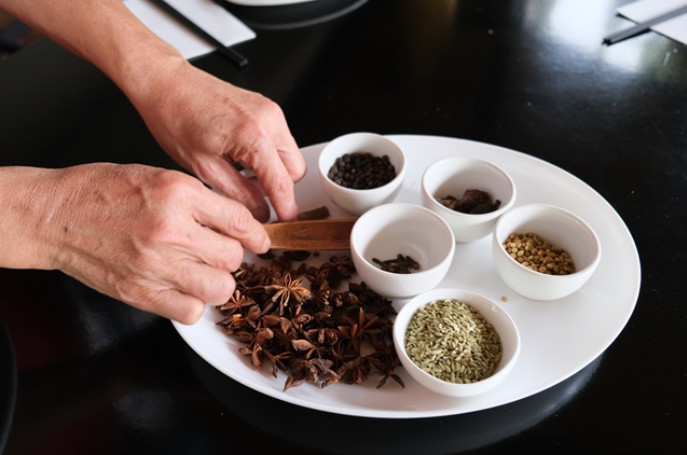 I briefly thought maybe it was so good because I was so hungry after the long trip, so I asked a female traveler from the United States who was sitting next to me about it. thought.

She is a big fan of pho and tried it in many restaurants in the United States and even cooked the dish herself.

“The pho in this restaurant it is good. The broth is great, perfect level of spice, and the noodles and all the trimmings are delicious,” she said confidently.

Satisfied and with a full stomach, I spoke with chef Nguyễn Văn Mỹ, who has run the restaurant since it opened 26 years ago.

He showed me the restaurant’s many achievements, including Best Asian Restaurant certificates from local hotel organizations and badges from online travel agencies like TripAdvisor.

Mỹ also proudly said that the restaurant has been consistently chosen to host and introduce Vietnamese cuisine to international guests. And pho has always been the first choice since he started making it.

He told me that at the beginning, pho was not the main course on the menu and was only cooked two or three times a week. But with the dish’s growing fame around the world, more and more customers came to ask for a bowl.

Now Mỹ cooks a big pot of pho broth every day, which he boils for at least eight hours to bring out the best umami taste. He always chooses the best ingredients for the broth, including fresh beef bones and brisket, fish sauce, rock candy, onion and all the necessary herbs and spices such as ginger, cinnamon, star anise, cloves, cardamom, fennel and coriander.

He said all the ingredients were made for a style of blended broth, influenced by both the northern and southern regions of Việt Nam.

“It will make all Vietnamese people happy regardless of where they are from because they can experience the similarity of taste while eating. pho here,” Mỹ said. “Even the dried rice noodles and fish sauce are from Việt Nam and shipped to Cape Town.”

outraged phomany other famous Vietnamese dishes like fresh spring rolls, fried spring rolls and Vietnamese salads have captured the hearts of South African and international diners for the restaurant’s authentic and healthy taste.

Many locals come to Saigon Restaurant for Vietnamese dishes. I was very moved by Mỹ’s efforts to introduce Vietnamese cuisine to South Africa. Next time I return to Cape Town, it will surely be time to try all the other dishes. VNS