Hanoi (VNA) – The Vietnamese and Lao defense ministries will work towards full implementation of their cooperation plan in 2022, as agreed by their vice ministers on June 2.

Cuong stressed that Khamliang Outhakaysone’s visit, which takes place within the framework of the Year of Vietnam-Laos Friendship and Solidarity, Laos-Vietnam 2022, will be a driving force for cooperation between the two armies, contributing to consolidate and strengthen the great friendship, special solidarity and comprehensive collaboration between the two countries, for peace, stability, cooperation and development in the region and in the world in general.

For his part, Khamliang Outhakaysone said Laosalways highly values ​​centuries-old friendship and all-round cooperation, and expressed his belief that it will help to fight challenges and conspiracies that aim to undermine bilateral relations.

They shared the view that defense cooperation remains a pillar of the Vietnam-Laos relationship, with regular meetings and visits, and the effective implementation of collaboration mechanisms. 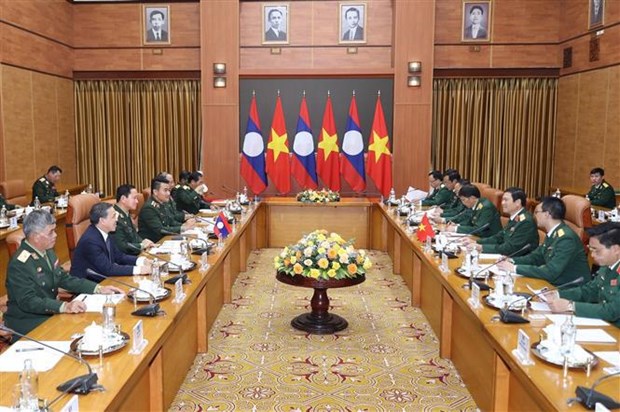 At the talks (Picture: VNA)

Joint efforts have been made in the fight against cross-border crimes, contributing to building a common border of peace, friendship, cooperation and development, they said.

They considered that the mutual support in medical equipment in the fight against COVID-19 vividly demonstrates the solidarity between the two armies.

Regarding the direction of cooperation, the two sides agreed to intensify information sharing between their border guards, conduct more joint patrols and continue to coordinate in the fight against crime and immigration. illegal, and to ensure safety and security in border areas.

They will also pay more attention to cooperation in personnel training and information work.

After the talks, Khamliang Outhakaysone paid a courtesy call on Defense Minister General Phan Van Giang, who said the defense cooperation was deepened through the spheres. 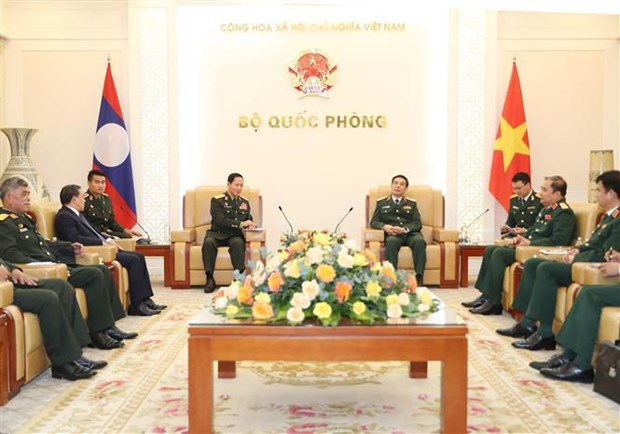 The Vietnamese Ministry of Defense hopes for stronger multifaceted cooperation between the two sides, the general noted.

Khamliang Outhakaysone told his host that the General Staff of the Lao People’s Army has endeavored to contribute to preserving and promoting the privileged relations between the two countries and armies./.