Prince William, Duke of Cambridge William waves to members of the Jamaica Defense Force as his wife, Kate, Duchess of Camridge looks on. The couple married at Westminster Abbey in London on this historic day in 2011.

1429: Joan of Arc enters Orleans, France, and defeats the English.

1628: Sweden and Denmark sign a defense treaty against the Duke of Wallenstein, dragging Sweden into the Thirty Years’ War.

1706: Electors in Bavaria and Cologne are banned by the Holy Roman Empire.

1798: Joseph Haydn’s oratorio The Creation is rehearsed in Vienna, Austria, before an invited audience.

1826: A liberal constitution is promulgated in Portugal for a hereditary monarchy.

1848: Pope Pius IX disassociates himself from the Italian national movement.

1918: End of the main German offensive on the Western Front in World War I.

1931: US President Herbert Hoover receives the King of Siam. This is the first time an absolute monarch has visited the White House.

1946: the Anglo-American committee advises against the partition of Palestine; 28 former Japanese leaders are indicted in Tokyo as war criminals.

1973: Israel decides to extend the civil rights of its 336,000 Arab citizens to reward the Israeli Arab community for its loyalty.

1974: US President Richard Nixon announces that he is releasing edited transcripts of secretly made White House recordings related to the Watergate scandal.

1975: US Task Force evacuates foreigners and Vietnamese by helicopter from Saigon.

1981: Lorry driver Peter Sutcliffe admits in a London court to being the ‘Yorkshire Ripper’, the killer of 13 women in the north of England over a period of five years.

1983: Harold Washington is sworn in as Chicago’s first black mayor.

1989: Police arrest about 2,200 workers and students in South Korea in an attempt to block a union rally.

1993: Gunmen in Costa Rica free 18 Supreme Court justices they had held hostage for four days. The police capture the five gunmen after a brief shootout. Britain’s Queen Elizabeth II announces that, for the first time, Buckingham Palace will be open to tourists to help raise funds for repairs to fire-damaged Windsor Castle.

1995: In Sri Lanka, Tamil separatist rebels shoot down a military plane with a missile, killing 52 people and intensifying their 12-year war for a homeland.

1998: Brazil announces an unprecedented plan to protect an area of ​​the Amazon rainforest twice the size of France.

2003: Pakistani police in Karachi arrest six suspected members of the al-Qaeda terror network who allegedly planned attacks on US targets in Pakistan.

2004: President George W Bush and Vice President Dick Cheney meet behind closed doors with the 9/11 commission; afterward, Bush says he told the panel that his administration tried to protect America from terrorists as warnings mounted ahead of the devastating 2001 attack.

2005: UN peacekeepers sexually abused and exploited local women and girls in Liberia, reports a UN spokesperson. The allegations that have been proven in Liberia are the latest to be made against UN peacekeepers, who have been accused of sexually abusing the very people they were sent to protect on peacekeeping missions. Bosnia and Kosovo to Cambodia, East Timor and Congo.

2007: Gunmen seriously injure one of Iraq’s best-known radio and television journalists, Amal al-Moudares, near her home in the capital. A few weeks earlier, on April 5, Baghdad police found the bullet-riddled body of Khamael Muhsin, another famous radio and television presenter.

2008: The United States and France introduce a UN resolution that would allow countries to chase pirates off the coast of Somalia into the country’s territorial waters and arrest thieves at sea.

2009: At a prime-time press conference marking his 100th day in office, US President Barack Obama says waterboarding authorized by former President George W Bush was torture and that the information that he obtained from terrorist suspects could have been obtained by other means. The World Health Organization raises its alert level for swine flu to its highest level.

2011: Britain’s Prince William and Catherine Middleton marry in a lavish ceremony at Westminster Abbey in London.

2013: Opening statements are held in Los Angeles in a wrongful death lawsuit filed by Michael Jackson’s mother, Katherine Jackson, against concert giant AEG Live, claiming it failed to properly investigate a doctor who cared for Jackson and was later convicted of manslaughter in his death in 2009. (The jury determined in October 2013 that AEG Live was not responsible.) 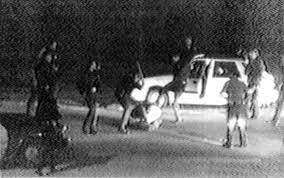 The beating of Rodney King, captured on video here, does not result in the conviction of the police officers charged in the incident as they are acquitted by a Los Angeles jury on this day in history, 1992. (AP)